This map shows where historical orchards were located using old aerial photographs. From the 1890’s to 1950’s, orchards commonly used lead arsenate to control pests, meaning lead and arsenic likely remain in the soil. Enter your address in the search box to see if it’s located on an old orchard, and if any sampling results are available. Ecology can sample your property for free, contact us at FormerOrchards@ecy.wa.gov if you are interested.

You can also view information about other areas of arsenic contamination statewide, by searching an address or viewing that area on the map: 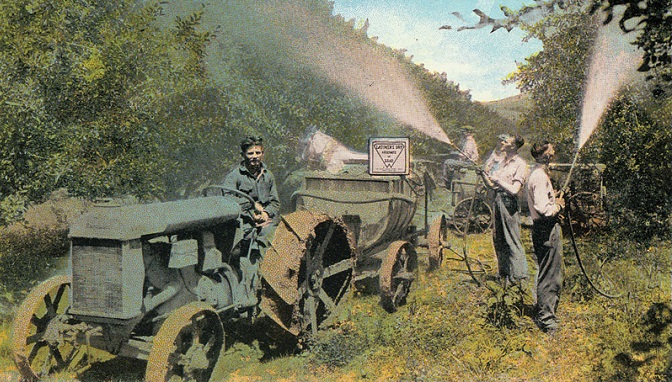 In the late 1800s, a pest called the codling moth was destroying orchards across central Washington. It burrowed into the fruit, causing it to rot. To protect the fruit, a pesticide called lead arsenate was commonly sprayed on the fruit trees. Unfortunately, the codling moth became resistant to the pesticide, and more needed to be applied over time. Lead arsenate was used between 1890 and 1950, meaning some orchards sprayed their trees for decades. The lead and arsenic in the pesticide settle in the soil. They do not break down, and stick tightly to the soil.

The result? More than 100,000 acres of former orchard lands across Central Washington still have lead and arsenic in the soil.

Using old aerial photographs, we are able to show (in orange) the locations of historical orchards in five counties – Benton, Chelan, Douglas, Klickitat, Okanogan, and Yakima. These five counties had the largest amount of orchards, meaning they likely used lead arsenate.

The areas shown in orange depict historic orchards, those in production between approximate 1890 and 1950. Lead arsenate applied to crops during that time was not only legal, but recommended by government agencies. However, not all historic orchards grew apples and/or pears, and not all applied lead arsenate as a pesticide.

Orchards that have been planted since 1950 are not included in this map.

Land use has changed over time and some historic orchards identified in this map may now be in residential or commercial use.